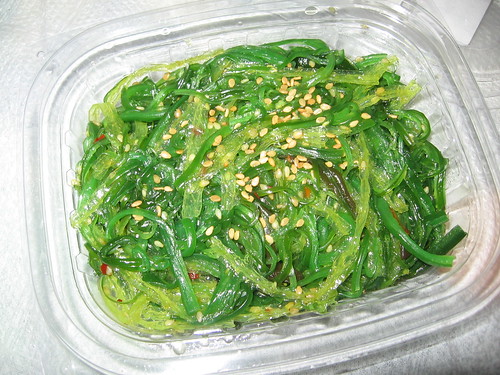 From E-Mart Grocery on Farmington Ave. in Hartford, CT.

I was surprised to find E-Mart in the spot where the old Cheese 'n' Stuff store used to be. It's a new Korean grocery that's been there for six months, but I (and I assume many other people in Hartford) thought it was still an empty space and never visited.

E-Mart is a nice clean grocery that has fresh fish, produce, home-made potstickers and dumplings, home-made kimchi, many Korean staples, Asian snacks, spices, sauces, and so on. I was most impressed by the variety of ramen, udon, and other noodles they have, even more than West Hartford's A Dong Supermarket. It'll take me awhile to go through them.

The ingredients on the seaweed salad are seaweed, sesame, vinegar, and sugar, but I think there probably was some oil and other ingredients in it. It was very good and was authentically Asian in flavor.