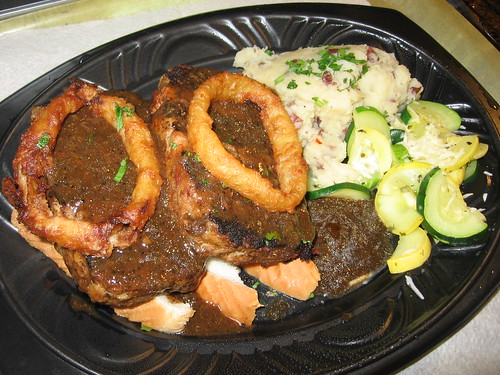 With mashed potatoes and squash. From the now departed Hops Grill & Brewery in Newington, CT.

I saw on the evening news that Hops Grill & Brewery in Newington was closing tonight. I can't try a restaurant when it's gone, so I called them up and had to get my order to go because they were closing early. It's part of a chain like Chili's and TGIF, but this was the only one in Conn. According to reviews, it's normally crowded, but not tonight.

It's probably a gamble to try a restaurant on closing night. Depending on the morale of the staff, they either could try to go out with a bang, or not give a damn. Tonight they didn't go to either extreme; the food was good, but not spectacular. The meatloaf was standard, with a slight barbecue flavor, and the peppercorn sauce was spicy and left a slight heat on my lips. The mashed potatoes and squash were also standard, with a little bit of cheese topping the squash, and chives over everything. The portions were twice what I could eat, so it's a good thing I was home already and didn't have to ask for a doggy bag.