I ordered a lobster roll:

I've had lobster salad sandwiches before, but not an authentic lobster roll.  It was hot and buttery and very good.  It came with fries and cole slaw in a plastic basket.  Old Wolf had broiled scallops, served the same way.

Food is ordered at a counter from a menu board:

And a large fish tank:

That's Old Wolf getting photos and video of the tank's main attraction, the toony fish.  This is a large puffer fish that looks like a piscine version of Sid the Sloth from Ice Age: 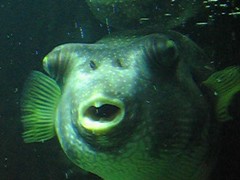 This fish is unique among even puffer fish.  I've tried to find photos of fish like it, but none of them had the cartoony human-like eyes and other toony features that this fish has.  The fish looks like it's computer generated.  For the full effect, here are some videos.  Click on each picture to see the video. 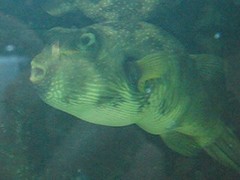 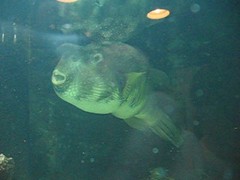 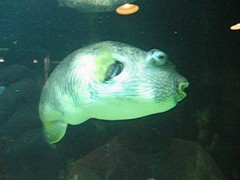 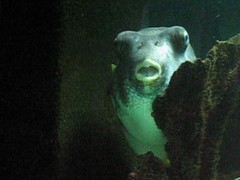 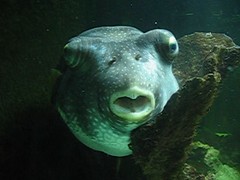 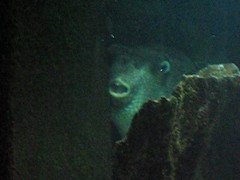 This last one reminds me of the ninja cat.  The fish kept watching us like this while we ate.
Subscribe