This afternoon on my way to work, two huge flatbed tractor trailer trucks raced to beat me to where two lanes merged, and didn't care that I had reached it first.  I didn't know there was a race until I saw the first truck in the rear-view mirrors not slowing down.  I braked and the truck passed very close to me and almost into me, followed by the second one.  Both were the same model and had Napa wheel flaps.  They went through the red light at the next intersection.  I got the license plate of the second one, B-305-488, and went straight to the Farmington, Conn. PD to report the two reckless drivers before they actually hurt someone.  There, the officer who took my report made excuses for not stopping them and said he'd get back to me. 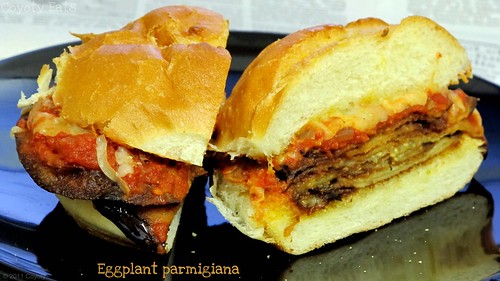 Eggplant parmigiana on a roll, originally uploaded by Coyoty.