What do you get when you cross a Nissan independent suspension commercial with an enthusiasm for double rainbows?

A study of 8,745 older women by Northwestern University’s Feinberg School of Medicine in Chicago, published in yesterday's Journal of the American Geriatrics Society, has found that the more obese an older woman is around the hips, the worse they do on mental tests.  Comparing apples to pears, researchers discovered that for each point a pear-shaped woman's BMI score increases, her Modified Mini-Mental State Examination, or 3MSE, score decreases a point.  Apple-shaped women, however, increase in mental ability as their weight increases, so it's better to put on the pounds above the hips than below them. 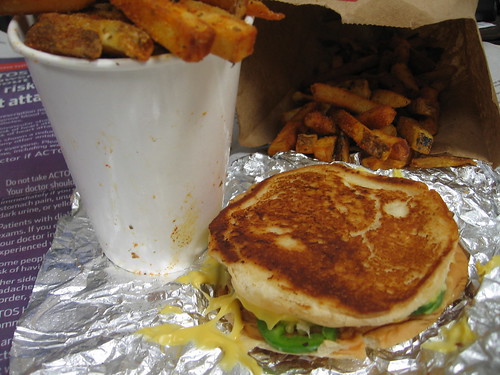 With cajun fries. From Five Guys in Farmington, CT.