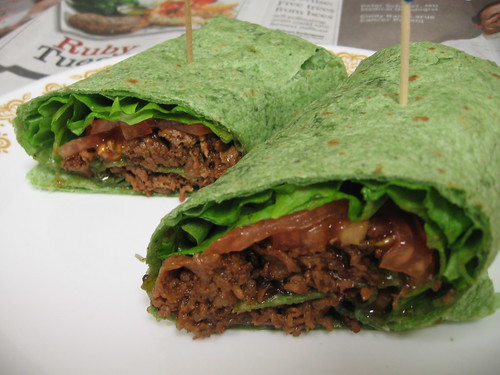 The fat from the steak mixed with the sesame ginger sauce is plate-licking good.

In response to the "warnings" from RevolutionMuslim.com that South Park creators Matt Stone and Trey Parker "will probably wind up like Theo Van Gogh for airing this show," Stone and Parker have "censored" the episode by bleeping out any reference to Mohammed and putting "CENSORED" bars over any image that could be construed as a depiction of the Prophet.  They have also replaced the image of Mohammed in a bear suit with Santa in a bear suit.  (Not having seen either version, I'm not sure how one could tell the difference.)  So now the show has nothing to do with Mohammed other than background context.  Let's see how long it takes for it to still offend the religiously insecure.

For $15,000, you can own a watch where every numeral is on a tread.  The Devon Tread 1 Watch is powered by a lithium ion battery and uses optical sensors to maintain accuracy.