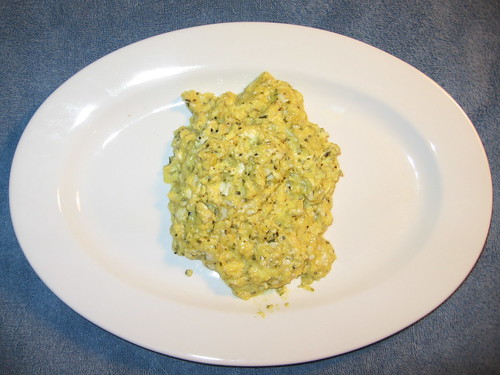 Eggs scrambled with garlic and herb seasoning and shredded parmesan. Looks a lot better than the last batch of eggs I posted, doesn't it?

This is a substitute for the second half of yesterday's pizza, which I preferred to throw out instead of throw up. I'd ordered a bacon, hamburger, and pepperoni pizza from Pizza 101, but while it looked good, everything else about it was bad. They took two hours to deliver it, it arrived cold, and there were what appeared to be hard bits of gristle in it. Or maybe toenails, they were like that. That's the last pizza I'll order from them. They'd been declining for awhile, but not enough to drop them. This was enough.

I was planning to spend the evening watching TV, but I made the mistake of going downstairs to throw out the remains of yesterday's horrid pizza.  When I passed through the lobby of the building, there were some residents looking at and talking about a fire that someone had set in a Post Office basket of flyers this morning. There hadn't been any alarms going off, and no one could recall the fire department being notified.  Everyone assumed that the management would have called the police about it, but I don't assume such things, and I called the police to see if anyone had reported it.  No one had, and my call was the first report, at 7:30 p.m.  From the testimony of the other residents, it had been set around 5 a.m. previously.  I spent most of the evening giving statements to the police and fire marshal.  Then, a neighbor who knew I work with computers asked me to help her with some connection problems, and that took up the rest of the night.