An 8-year-old boy in Taunton, MA was asked in class to draw something related to Christmas, so he drew Christ. Because He was on the Cross instead of in the manger, the teacher declared it a violent image and the school suspended him, requiring him to have psychiatric evaluation (at his parents' expense) before he could return. His parents are now trying to move him to a different school.

hisensei808
Take this job and shove it ...
Have you ever walked off a job on the spot? What drove you to it? Did you regret it afterwards?
Reply 365
I was hired to help set up a new store and I told the interviewer that I was acting in a play and I would not be able to work on rehearsal and performance nights, to which he agreed. One performance night, I was told to stay and work regardless of the play, and if I didn't, I'd be fired. They did not appreciate that it was a serious obligation that they themselves had agreed to, but I did, and left. If I stayed, everyone at the theatre would be screwed, instead of just me if I left. In the end, the employer was ruled at fault at a labor hearing and had to pay my unemployment compensation. 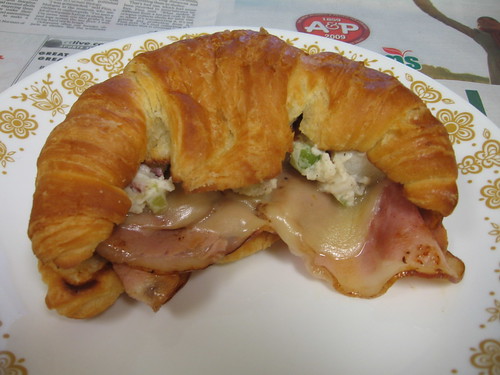 I saw "creamy ham and potatoes" featured today at What's For Dinner, and thought, the cafe has ham and potato salad, so that might work...

It was interesting and not bad. With the tartness of the potato salad, it tasted a little like a hot dog with sauerkraut, but only a little. It was worth trying, I think.

Check writing is a dying art, but it's not dead yet. It will be in Britain by 2018, though. Citing more efficient and inexpensive ways to make payments in the 21st century, Britain's banking system will phase out check processing over the next eight years.

Roy Edward Disney, nephew of Walt Disney and the last Disney scion in his uncle's company, has died at age 79 of stomach cancer.