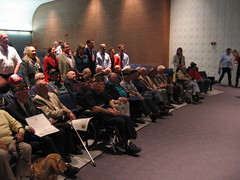 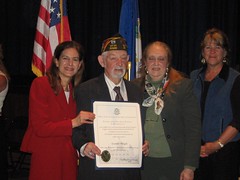 World War II, the final one, hopefully.  These are the veterans from East Hampton, Conn.  This morning my father Everett Emerson Wright, 81, was honored among them at the East Hampton High School by the state for his service in the war, receiving a public service award certificate from Secretary of State Susan Bysiewicz.  Veterans were invited to come up and tell stories, and later photos were taken.  My father seemed to get the most attention.  Everyone loves Everett.  Afterward, we went across the street to the VFW post for a reception.  More photos of the event are here.

The cloud in the silver lining was that numerous times throughout the ceremony, the veterans were reminded that they are going to die soon.  They were told that the awards were being held in each Connecticut town as quickly as possible because 40 WWII veterans a day are dying.  They were told that when the project was planned, a veteran said they should better do it fast.  The subject of imminent death was mentioned a few other times.  I think the point about the 40 a day was enough and they should have focused more on their lives than their deaths.

Later, I went to see the movie Star Trek, and it did not disappoint.  The actors did a good job of recreating the characters while not being slavish to them, and I think that's accounted for in the story.  I think J.J. Abrams will be considered a great cinematographer for his ability to use paradoxes effectively.  In Cloverfield, he used the videotape format to show flashbacks that weren't really flashbacks in the conventional sense.  In Star Trek, he revises the backstory of the Enterprise crew while at the same time keeping it within the official continuity of the TV series and movies.  Nothing is invalidated, though some things may need to be accounted for in the future (and past).  In his series Lost, he's just now dealing with the nature of paradoxes, and at one point in this movie he has a character comment on the hangups people have about them.  I think this is easily the best movie of the franchise.

Yesterday MTV's new Palladia station broadcast Pink Floyd's "The Wall"...  or most of it.  Despite being a cable station for adults showing a movie with adult themes, the people at Viacom apparently thought their audience couldn't handle those themes.  They blanked out "politically incorrect" words in the movie, such as "queer" and "jew" in the title song, and there was some shoddy scene editing.
Collapse