CNN reports that in response to Palin's "pallin'" accusation that Obama was a close associate of a militant Viet Nam protester (whom she calls a terrorist), with McCain apparently approving this message, the Obama campaign will be airing attack ads starting in a few hours associating McCain with a financial "terrorist", Charles Keating. The ads will supposedly document how involved McCain was with the previous banking crisis, and imply that if McCain were to become president, he would disastrously mismanage the current situation as well.

The computers at work don't just have mice. 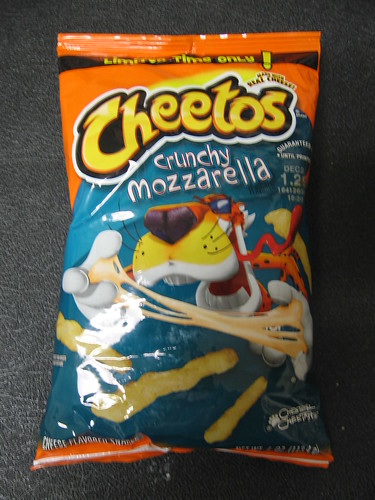 These are pretty good, and they don't make my fingers indelibly orange. It says real cheese, and low moisture mozzarella cheese is listed in the ingredients, as well as "granular cheese". In addition to the mozzarella flavor, there's also some garlic and pepper flavoring.

It looks like the food companies have decided they can't shrink the packaging any more because people have noticed, so they're raising prices again. This is the first 4 oz. bag I've seen go up to $1.29 from 99 cents. It does look like they increased the size of the bag a little first before raising the price, to give the illusion of getting more for the money.